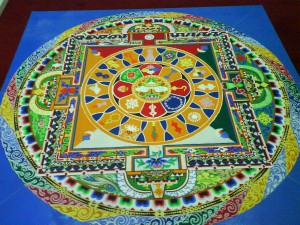 Planned again in the summer to hold a retreat on the Packaging, so slowly I will throw you the information for review: DUCHARME - SITATAPATRA

one of the aspects of Packaging,
a bodhisattva in the Mahayana tradition and yidam in the Vajrayana tradition, belongs to the family of Lotus (sansk. Padma).

Sitatapatra or white umbtella Tara - Buddha protector with all the ornaments state of joy (Skt. Sambhogakaya) in white light form.
Sitatapatra in a peaceful manner depicted in traditional vajra paryanka-asana, one face, three-eyed, two-handed, left hand holding a white umbrella heart (Skr. Atapatra), the right hand - in the Abhaya Mudra. In front of her - offering five senses and jewel-cintamani. Her white umbrella saves everyone who comes under its protection against all kinds of dangers and diseases, damage to items such as water, fire, wind, as well as quarrels, litigation, drought and famine, wars and epidemics.
White umbrella - is one of the eight auspicious symbols of Buddhism.
According to legend, when Sakyamuni remained still an ascetic and was terribly emaciated woman named Sujata offered him milk, and the future Buddha saw on the surface reflection of eight characters (Wheel of Law, lotus, endless knot, white umbrella, the standard of victory, goldfish, sink and the vessel) and realized that it was a sign that he is close to his goal. White umbrella dispels all evil influences.
This umbrella is the main attribute Sitatapatry in its various guises: from single-headed two-handed to tysyacheglavoy, Thousand, tysyachenogoy Sitatapatraparadzhity.

Sitatapatraparadzhita - subsistence White Tara, Sitatapatra in protecting its powerful form, corresponding to an embodiment of the Bodhisattva Avalokitesvara, which is called the "Lord of the white umbrella."
She - invincible defender, Ushnisha manifestation of Shakyamuni Buddha, according to legend, it originated as a response to the request of the gods on protection against the evil demon that oppress them.
Sitatapatra very closely associated with the Buddha, it is called his "daughter of the heart." It concentrates its power primarily for protection from disease, accidents and adverse effects at all. Patroness of travelers.
Contemplation Sitatapatry benefits not only in this, but in the next life.

Dukkarmo, White Umbrella, only closely related to the Buddha, it is called his "daughter of the heart." Her mantra was not uttered by anyone. She just appeared at the very moment when Dukkar originated from a node on the top of the Buddha. White Umbrella - defender, it concentrates its strength, especially in protection against enemies and accidents.

We goddess thousand heads and a thousand hands and a thousand feet, legs she tramples hosts of demons, demigods and dragons. Usually all her left hand holding an arrow, all right - the Wheel of Law. She is the female compliance Thousand Avalokitesvara. . This form of the goddess known as Ushnisha-Sitatapatraparadzhita (Tib. GTsug-tor gDugs-dkar), and translated above prayer is addressed to her. Her body is white, and its set goals consistently red, yellow, white, green and red on top - blue angry; color heads symbolize her power over the five cardinal points, including center. -. Image countless eyes covered her body as a symbol of its omnipresence. In two hands joined at the chest, she holds the Wheel of Law, white umbrella and arrow. Her heavy gold jewelry. Her skirt red with gold embroidery; veil falls from her shoulders - green with gold pattern. Her tiara - Image thousand Tathagatas, so the prayers and songs it is called "Mother of all Gene" - a title often given to Tara. She is standing on something like mats, flouting the hosts of the damned creatures, fantastic animals overclockable.

The prayer below is according to legend, is composed Gyalba Tszonkapoy, who was known as the author of numerous prayers and hymns in honor of various deities.

"I bow before seven million Jin, meeting Arhat, before all rishami, sophisticated mantras before Brahma and Indra, before Mahadeva (Shiva. - Note. Trans.) And Narayana (Vishnu. - Note. Trans.), Before Legdan Nagpo Dung tung, before ten Sugata and before all to read. Of the crown on the head Sugata came word spell by which we sing holy prayer Dukkar commanding a large retinue.

Her noble, emerged from the top of the Lords Ushnisha Shakiev living in the sacred world of gods, demons invincible knowledge, banishing all enemies, we call it Ushnisha-Sitatapatra invincible anyone.

I welcome you, enlightenment, only mother Jean past, present and future, you, whose fame gets everywhere in the three worlds.

I welcome you to flee from the evil influences of demons and planets from premature death and bad dreams, from the danger posed by the poison and weapons, fire and water. Mandala your essence is enormous. You have a thousand head full of countless thoughts, a thousand hands holding countless attributes.

Mistress of all mandalas in the three worlds, acting by means of twenty-two frightening wise, the omnipresent, tame the evil essence, I welcome you, the goddess of spells, will cast the demons to dust.

In you I take refuge from the fear of untimely death of the disease, from fear of humans and demons. I plead with you forever protect me from all fears.

I'm begging you just at the thought of your gait to release me from the gods, devas, nagas serpent, asuras, demons, and those evil beings who kidnap light, pull the child from the womb of the mother, eat raw meat and blood.

If through any door can enter thieves and rob us of our wealth, - destroy them, and smote them flaming dagger.

In short, as I take refuge in you, an enlightened being who has many wise, as I say my prayer and live in peace, let all my wishes come true.

You Dukkar goddess born from the crown on the head Sugata, bit the dust hosts of demons and evil spirits, do so on divnosiyayuschaya enlightenment to spread the Doctrine. Grant that we received a blessing from Demchog Dukkar born from Ushnisha Merciful Sugata, which destroys all who prevents the spread of the Good Law, bringing happy fruit. "

Yidam Sitatapatra-paradzhita portrayed standing in a pose with the right leg straightened, and Thousand Thousand.
This white svetoforma able supreme joy (Skt. Sambhogakaya).
Her heavy gold jewelry. Her skirt with gold embroidery; veil falls from her shoulders - green with gold pattern. Her tiara - Image thousand Tathagatas as it styled "Mother of all Jean - winners of samsara", a title often given to Tara.

Depending on the tradition, she is portrayed holding in his left hand main umbrella of red silk and arrow in the main right hand - Dharmachakra red, the rest of the left hand - arrows on the right - Dharmachakra;
or in two hands joined at the chest, she keeps Dharmachakra, white umbrella and arrow.

She has a thousand heads of the five colors of wisdom, blue series (angry), yellow, white, green and red (the color heads symbolize her power over the five cardinal points, including center).
Image countless eyes covered her body as a symbol of its omnipresence.
Mandala around the body of the Azure color, filled with shining golden rays, surrounded by flames.
At the earliest images of each beam ends eye.

Instead of teeth in her defenders and protectors, her eyes see everything, her right arm and leg, five hundred bless all beings, and the left - protect them, driving away all harmful.
Thousands of feet trampling figures countless demons, demigods and Nagas - beings, symbolizing countless vexations, are changed into yoga compassion Yidam.

Sitatapatraparadzhitu considered as subsistence Tara that corresponds to the embodiment of the Bodhisattva, which is called the "Lord of the white umbrella," Thousand Avalokitesvara.
White umbrella that keeps goddess among the eight auspicious symbols of the Dharma.
It reflects and scatters the scorching rays of all adversities and dangers.
This umbrella is the main attribute Sitatapatry in its various guises: from single-headed two-handed to tysyacheglavoy and the thousand forms.

200 people on the right - yellow, frightening and laughing. 200 persons behind - red, rebukes and furious. 200 people left - green, with a compassionate and peaceful expression, and 200 persons from the top - blue, with a look of surprise and anger. On each face - three eyes, each decorated with shining face, angry Vajra. On each head - seven relics [guru lineage] and ten Tathagatas. Therefore, it is topped seven million perfect enlightenment.

First the right and left hands - in a gesture of protection talent, keep mkoleso and white umbrella handle with an arrow in his chest. The remaining 99 right and left hand holding the wheel (on the right) and arrow (on the left). Right next hundred hands holding vajra, the third hundred - jewelry, fourth hundred - lotuses, and the last one hundred - vishvavadzhry.

Of the remaining 400 Left hand holding the first hundred bows, the second hundred - swords, the third - the lasso, the last - book. It is decorated with all kinds of jewelry, fine shelkovymim garments - top and bottom.

The right-wing 500 feet stretched and crush all the dangers - such as punishment by kings. The left 500 feet flexed, destroy all the evil - such as creatures that steal bodily effulgence of living beings. In all parts of the body - hundreds of thousands of eyes looking at the sides and wide open, shining like lightning and gazed fiercely. It takes 9 poses dance; from every pore of her body emanated light like the end of time Vajra fire, flames, completely covering the mandala three times, the light that protects all living beings from fear.